Lehigh Cement’s Union Bridge Plant Hosts State of Maryland Visitors
When autocomplete results are available use up and down arrows to review and enter to select.
< Back to News
07.26.2022 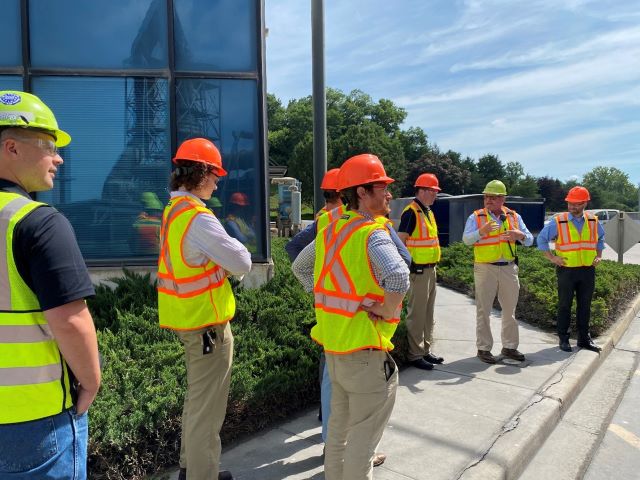 Lehigh Hanson recently welcomed representatives from the State of Maryland and University of Maryland to its Lehigh Cement plant in Union Bridge, Maryland, for an engaging discussion around decarbonization in the cement sector.

Visitors included Matthew Helminiak, Commissioner of Labor and Industry, and Jim Rzepkowski, Assistant Secretary, from the Department of Labor; Mark Stewart, Climate Change Program Manager, Air Compliance Engineers John Artes and Alex Holt, from the Department of Environment; and Kathleen Kennedy and Jared Williams with the University of Maryland’s Center for Global Sustainability.

Kurt Deery, Environmental Manager for the Union Bridge plant, provided the group with an overview of the plant, including history, environmental performance and the longstanding work that the team has been engaged in with the community and key stakeholders. Kent Martin, Plant Manager, then led the group on a tour of the facility, culminating with a trip to the top of the more than 400 ft tall preheater tower that provided a helpful overview of the plant, including the innovative New Windsor quarry conveyor system. that was completed in 2019.

Following the plant tour, Lehigh’s Adam Swercheck, Environmental Director – Cement, then led the group through an engaging discussion about the roadmap to carbon neutrality, covering key areas outlined in the Portland Cement Association’s efforts as well as the leadership that the company has taken. Specifically, the company’s commitment to the industry-leading goal of 400 kg CO2 per ton of cement by 2030 as well as achieving at least half of all product revenues from sustainable products by that same date as detailed in the “Concrete Promises” that Lehigh Hanson’s global parent company, HeidelbergCement, announced at its Capital Markets Day 2022.

This was the first of what will be an ongoing engagement with these key state-level stakeholders as Maryland looks to achieve its ambitious carbon reduction targets laid out in the Climate Solutions Act passed earlier this year, which calls for a 60% reduction in greenhouse gas emissions by 2031 compared to 2006 levels, and to achieve net zero by 2045.

“This was a great opportunity to meet with some of our key stakeholders and share our sustainability goals,” said David Perkins, Vice President of Government Affairs and Communications for Lehigh Hanson. “Such ambitious targets cannot be met without collaborative work and the Union Bridge plant has taken the initiative to work with the State of Maryland to drive innovation and ensure that the company’s competitiveness is maintained.”