Lehigh Hanson Receives U.S. DOE Funding for FEED study of carbon capture project at its new Lehigh Cement Plant in Mitchell, Indiana
When autocomplete results are available use up and down arrows to review and enter to select.
< Back to News
08.31.2022 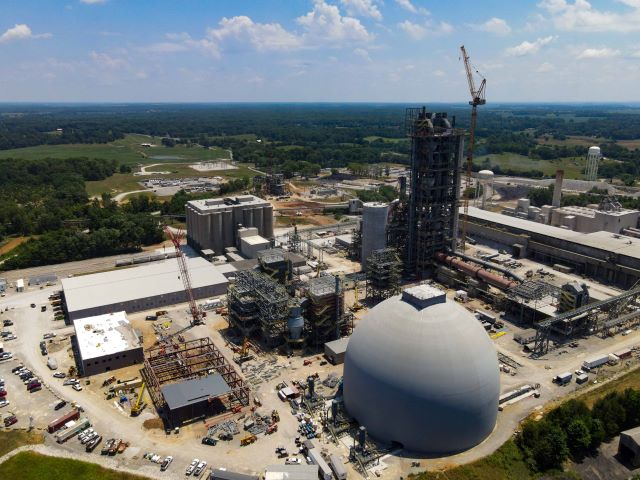 Lehigh Hanson, Inc. is pleased to announce it has received approximately $3.7 million in funding from the U.S. Department of Energy’s (DOE) Office of Fossil Energy and Carbon Management (FECM) to conduct a front-end engineering design (FEED) study retrofitting Mitsubishi Heavy Industries America, Inc. (MHIA’s) carbon capture technology at its new state-of-the-art cement plant in Mitchell, Indiana. The company is also contributing about $1.1 million in funding which brings the total value for the project to around $4.8 million. Commercial engineering support to the project will be provided by Sargent & Lundy.

The funding was part of a DOE initiative that awarded more than $31 million in funding for 10 projects to develop carbon capture technologies capable of capturing at least 95 percent of carbon dioxide (CO2) emissions generated from natural gas power plants, waste-to-energy power plants, and industrial applications, including cement and steel.

The new Mitchell cement plant will more than triple its current capacity and incorporates features to minimize energy consumption and enable the utilization of alternative fuels and raw materials to reduce greenhouse gas GHG emissions. The proposed project will capture and sequester approximately two million metric tons of CO2 per year or 95% of the CO2 emissions from the new cement facility. The primary objective of the FEED study is to evaluate the cost and performance of the overall project, including site-specific considerations for full-scale implementation. The project will also study the positive social, economic, and environmental benefits to the surrounding community.

“We are pleased to receive this funding so we can better understand what it will take to make our carbon capture project successful,” said Chris Ward, President and CEO of Lehigh Hanson, Inc. “We believe that carbon capture technology will play a significant role in achieving carbon neutrality and we are very excited to take the next steps in this journey at our Mitchell cement plant.”

The new Lehigh Cement plant in Mitchell is anticipated to begin full production in early 2023.